An indirect heat recovery system based on the “recuperation” effect is a solution commonly met in various ventilation systems for decades. Depending on the climate region – recuperators may be used to support the Air Handling Unit in winter operations – or summer. But regardless of where it is applied – the goal is the same: to minimize the cost of heating and cooling of the air while supplying it to the building together with ensuring zero cross-contamination between supply and return air streams.

As far we remember, the shape of the typical air to air heat recovery recuperator was a square, rotated by 45o when installed in the air handling unit. Its name (cross-plate) origins from the fact, that both airstreams – the supply and return one – pass the core of the recuperator always at an angle of 90 degrees. Made of mechanically bonded corrugated aluminum plates ensures very high airstreams separation reaching practically 100% together with relatively high heat recovery performance. This practically perfect separation (also known as a zero cross-contamination) together with the easiness of its manufacturing, application, and heat recovery performance makes it one of the most commonly met heat recovery solutions applied to the air handlers, wherever in the world. So, it seems that a Cross-plate recuperator gives us almost everything we can dream about. Everything besides the efficiency…

The shape is the limit

Of course, there are methods allowing to improve the performance of recuperators based on alternating plates. Usually, it is done by increasing the heat transfer total surface (by means of applying smaller plates spacing or making deeper embossing of each of them).  But whatever we do – we will increase its performance by a single percent, while significantly increasing the airflow resistance. So it looks like we are out of ideas on how to make the heat recovery of the Cross-plate recuperator significantly better. But who said, that the only shape of the air to air heat exchanger must be like we used to meet for decades? Maybe there is a chance to improve its efficiency, if we abandon the stereotypical thinking of it as a square.

The principles of heat exchange

Let’s recall one of the most important principles of heat transfer between two fluids. The best heat transfer occurs when the directions of both of them are opposite to each other. Instead of opposite let’s use a better adjective: “Counterflow”. If we relate this to the mutual flow direction between supply and return air like in the cross plate recuperator we find, that they are angled by only 90 degrees which are far from 180 – in other words, we need additional 90 degrees to make it counterflow.

The new approach to Air to Air recuperators design

So the clue of the efficient heat exchange effect is to direct both airstreams in the counterflow system. The air to air counterflow recuperator (being the essence of this article) has been designed having in mind this very heat exchange principle. Its design is somehow similar to the old cross-plate heat exchanger. The only difference is the central part of the recuperator, where both air streams are directed not at the angle of 90 degrees, but at 180.

1 – (left grey) first crossflow part, practically identical to the one which you find in the classical cross-plate recuperator 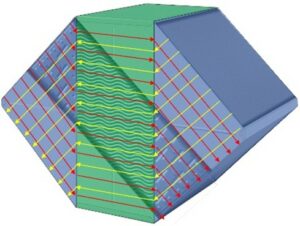 2 – (green) the counterflow core of the recuperator – where the heat exchange occurs with the higher intensity thanks to the full counterflow direction of both airstreams.

3 – (right grey) second crossflow part – identical to the first one.

For average flow conditions, the plate-cross flow respirator can offer about 78% of efficiency. Its equivalent expanded to the counterflow type can even gain an additional 10% of efficiency, to eventually reach 86% (you can read more about how to calculate the best efficiency for your heat exchanger). So, we are not talking about single percent points – this is rather a jump to the new range of the heat recovery performance.

Besides boosted heat recovery performance, the counterflow heat exchanger is no longer a square that gives a constructor a field to optimize the dimensions of the Air Handling Unit in which the recuperator is applied. Thanks to the two clearly different axes of the exchanger geometry, it is easy to deduce that it can be installed horizontally or vertically in the unit.

When installed horizontally – the constructor can reach a relatively low height of the Air Handler, which is very useful when designing ceiling suspended units.

The single counterflow air-to-air heat recuperators (also know as Hexagonal recuperators or simply HEX – because of hexagonal shape) can also be arranged into larger heat recovery systems when applied to the air handling units of relatively large airflow rate. Because there is no habit or code saying that one Air Handler may be equipped with one recuperator only – we created a system where multiple recuperators work as a team. This system called a HexWall – is an advanced heat recovery unit, ready to be installed in Supply-Return Air Handling Unit.

Our idea was to split the total airflow of the entire large Air Handler between many small recuperators working in parallel. Thanks to this, we have built a  short, easy to install heat recovery block of high efficiency and low air pressure drop.