Over the past 15 years, significant changes have been made to the design of fans used in the HVAC industry, in particular in air handling units. The solutions have undergone such changes that many people, seeing at the same time a fan used in an air handling unit until recently and an analogous construction that is a hit of current technology, would not think that both of these devices are basically the same application.

The transformation we witnessed was possible, on the one hand, thanks to the constant development of the technology of components used for constructing them, which translated directly into their availability. On the other hand, it was dictated by the need to optimize their design to ensure the best possible operation in a specific environment and their failure-free operations, while maintaining the ease of their production on a large scale.

To understand how much we have achieved in recent years, it is worth looking at this interesting step-by-step transformation, starting with something known as a DIDW fan.

Determining the creator of the air handling unit or the year of its invention seems to be impossible on the one hand, and absolutely unnecessary for our article on the other. We can, however, guess what the conceptual work on its creation looked like. Most likely, someone who undertook its construction assumed that having at their disposal individual elements used to handle the air in the ventilation process, they could all be placed in one standard housing, creating one integrated system. When it comes to fan selection, there were not many options in sight, as the only type that could support a ventilation network with considerable flow resistance was the radial fan. Virtually the only solution available at that time was a DIDW (Double Inlet, Double Width) fan with indirect power transmission from the motor by means of two pulleys and a V-belt.

The use of a fan designed for independent operation in the air handling unit was far from perfect (although these imperfections were not noticed from the beginning due to the lack of new, better fan concepts for AHUs). The very first problem was the absolute lack of smooth airflow regulation, later partially solved by the application of dual-speed motors featuring relatively poor efficiency. The other imperfections were significant power loss on the V-belt transmission, the long footprint of the fan section and the practically absolute necessity to use the fan as the last AHU section without the possibility of applying secondary filtration downstream of the fan.

On the other hand, the DIDW fan required significant maintenance effort to keep it in good condition. Cleaning the interior of the fan assembly, especially the rotor was difficult due to the presence of the “scroll” housing. Also, the replacement of the v-belts and regular lubrication of bearing was generating additional operating costs for the air handling units and therefore entire ventilation system.

Even at a time when the DIDW fan was practically the only solution for air handling units, the need to control their actual revolutions without the need to stop the entire system and replace the pulleys began to arise. The concept of smooth and free regulation of fans’ operation, dictated mainly by the need to reduce electricity consumption, focused on the method of controlling the motors themselves.

Variable Frequency Drives (or Frequency Converters – FC) turned out to be a solution allowing for smooth adjustment of asynchronous motors revolutions, and thus the revolutions of the fan impeller itself. In the beginning, VFDs, although they appeared to be an ideal solution from the technical point of view, were not widely used due to their high price, which began to decline significantly in the years 2004-2010. The significant improvement in their availability allowed for their more and more widespread use and contributed to the most significant transformation of the Air Handling Unit Fan.

A Plenum fan – a milestone in the design approach

The wide availability of affordable Variable Frequency Drives with a wide power range contributed to the most crucial transformation of the fan set used in air handling units. The possibility of smooth adjustment of the operating point by forcing the desired motor revolutions even in the case of motors of higher capacities was perceived as a breakthrough in the broadly understood control of air handlers and also rooftop units. However, most importantly – the widespread use of the VFDs allowed for a breakthrough in the very concept of a fan set dedicated to AHUs. The impeller itself got mounted directly on the motor shaft, and the characteristic “scroll” housing known from DIDW fans has practically disappeared. The fan in the new version turned out to be easy to install, and thanks to the elimination of the belt drive – it practically didn’t require maintenance. A fan set constructed in this way, known as a Plug Fan or Plenum Fan (depending on the region of the world) seemed to be a perfect solution and did not require any further improvements. However, as it soon turned out, the further development of technology, especially in the field of electric drives, opened the field for further improvements to this concept.

So we get to what completely changed the face of electric drives and gave them the shape that is valid to this day. It is an Electronically Commutated (EC) Direct Current electric motor, which we have been successfully replacing the commonly known three-phase asynchronous motors as a drive for fan sets for a long time. To ensure maximum reliability, these motors have been removed from the typical components susceptible to wear, such as commutators or brushes, and replaced with a fully integrated electronic speed control system in their full range. We have replaced the traditional winding with permanent magnets connected to each other in a well-thought-out manner, and the entire structure has been reduced to an unprecedented compact size. From the purely functional side – we have achieved a significant improvement in efficiency while reducing the amount of heat and noise emission.

The result was a motor that turned out to be the perfect solution to be used as a drive for a fully integrated, compact fan set.

And here it is! A specialized fan set designed for use in air handling units. EC fan, which inherited the idea of direct power transmission from the original PLENUM fan, but uses the most efficient drive – an electronically commutated DC motor. We have here a fully integrated system combining the rotor, motor and electronic revolutions control unit. Let’s summarize what this combination has in common:

Take a look at the visualisation of Swiss Rotors’ Fan Sets. 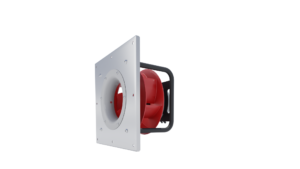